The official tourism promotional poster for Mie prefecture displays a dozen famous Japanese items of interest. Among them are ninja attractions, hot springs, lobsters, beef, pearls and pearl divers, Shinto shrine gates, the Suzuka F1 circuit and also theme park rides - cleverly summed up with the slogan “In fact, all of those are in Mie!” Indeed, the centrally located prefecture, which can be easily reached by train from both Osaka and Nagoya, is rich in cultural traditions and superb nature views.
Centuries ago Mie was virtually the only existing tourism destination for commoners, as it was a religious belief that pilgrims should visit the sacred Ise Jingu at least once in their lifetime. Pilgrims traversed the winding forested paths of Kumano Kodo pilgrimage road to the south, while the secret Iga-ryu ninja school flourished to the north. Nowadays Mie attracts domestic and international tourists alike and travelers also visit the Suzuka Circuit, the exciting theme parks and enjoy the gourmet delights.
Probably the most interesting destination in Mie prefecture is the Ise-Shima region, comprising mainly of Shima peninsula’s rugged coast and the islands situated in Kumano Sea. Due to its beautiful scenery the area has been designated as a national park. It is also one of the very few places in Japan where the distinctive local culture of female divers “Ama” (Sea Women) can be observed and studied. Get ready to reach the depths of Japan’s soul through an intriguing trip to Ise-Shima! 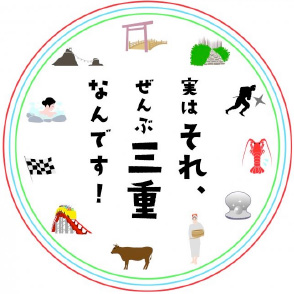 The most spiritual destination within the Ise-Shima National Park is undoubtedly Ise Jingu: “Grand” Shrine. The importance of Shinto’s main sanctuary dates back to several thousand years ago and integrates legends, myths and historical records together in the establishment of traditions that are fervently preserved to the present days. In fact, Ise Jingu consists of 125 Shinto buildings, including the two main Inner and Gekus and multiple auxiliary and peripheral shrines all located in the forested area south of central Ise city. The precincts of the Ise Jingu are just as splendid in their simplicity of blending pristine nature with ancient Japanese architectural styles. The entire area emanates a unique mystical spirituality that cannot be seen anywhere else in Japan.

The Geku is located closer to Ise-shi Station and is dedicated to the deity of food and housing Toyouke Omikami. The Naiku is about six kilometers away and enshrines Amaterasu Omikami: the Sun goddess and main deity of Shinto beliefs. The Ise Jingu are constructed in a peculiar “shinmei-zukuri” architectural style that bears no resemblance to, or influence from imported styles from mainland Asia. The traditional and simplistic features were created during the first centuries of the previous millennium when Japan’s cultural development was exclusively domestic. There is only one other place in the country where the “shinmei-zukuri” style has been adopted, and that is at Nagoya’s ancient Atsuta Shrine. Both of these sanctuaries are home to two of the three legendary items of Imperial Regalia. The Ise Shrine is said to keep the Sacred Mirror inside the holiest central shrine building that is inaccessible to visitors but can be partially seen behind tall wooden fences. 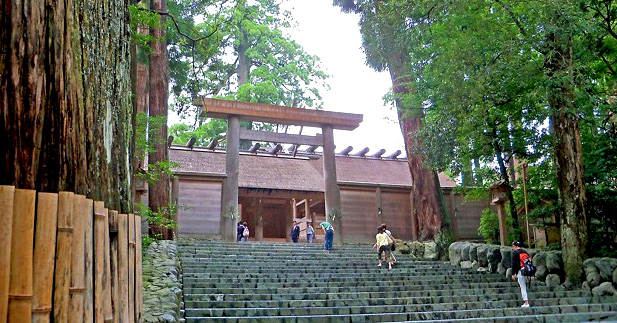 Among the most interesting and long-standing traditions of the Ise Jingu is the regular ceremony of transferring the enshrined deities to renewed buildings. Every 20 years the “Shikinen Sengu” ceremony is held in which the sacred shrines are rebuilt and the deities are transferred to the new structures. The last such event happened in 2013 so the next one is scheduled for 2033. 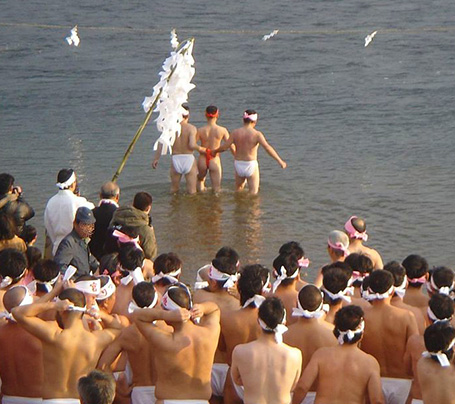 The millennia-old tradition of pilgrimage to the Ise Jingu includes participation in strictly defined rituals, the secrets of which have been handed down to each new generation. A devoted worshipper does not arrive at the holy shrines before undergoing a purification ceremony called “misogi”. Since ancient times this ritual has been held in Futamigaura seaside’s Futami Okitama Shrine, near the sacred rocks Meoto Iwa (Husband and Wife rocks) that are bound together by a straw rope across the sea. Pilgrims enter the sea at sunrise dressed only in a loin cloth to purify their bodies and souls, before visiting Shinto’s most venerated sanctuary. This is an unusual type of misogi as most often the ritual is held under a flowing waterfall. Today the misogi at Futama Okitama Shrine is held once a month and on the other days worshippers can receive a simple purification by attending a meditative ceremony conducted by the local priest. 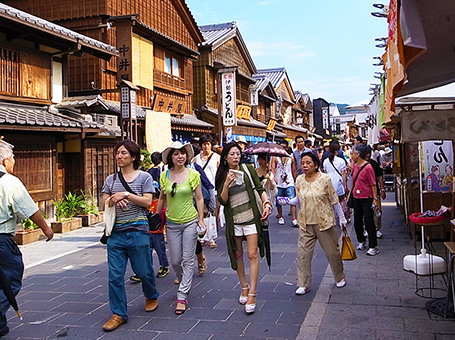 In present days the “naorai” feast often signifies lunch at a traditional-style restaurant in Oharai-machi, the bustling shopping street that extends to the north of the Naiku. Here visitors can try delicious local food, such as Ise lobsters, Ise udon noodles, akafuku: sweets made of red beans. They can also buy souvenirs typical for the Ise-Shima region. Craft workshops, music performances and museum exhibitions are regularly organized around the pleasant historic neighbourhood.

One of the most unusual sights that visitors in Ise-Shima can see are the hundreds of floating rafts spread over the sheltered inlets of Shima peninsula’s rugged coast. Beneath those rafts, in the water, are ropes strung with pearl oysters. Ise-Shima is the homeland of Japan’s pearl industry and boasts a long-standing tradition of pearl cultivation. However, the century-old pearl industry was originally based on the ancient traditions of female diving, and Ise-Shima is one of the very few places in the world where the unique culture of “Ama” can be observed. 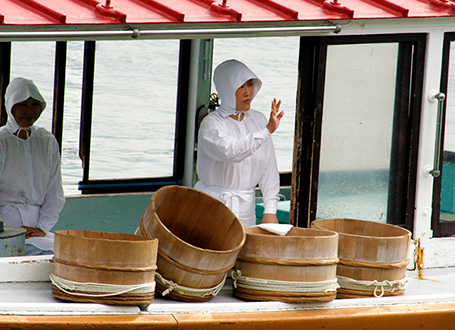 In addition to oysters Ama also collect seafood. The tradition is said to date back to 2000 years ago when it also spread to certain areas in Okinawa, Korea and China. The “Sea Women” dive without any air tanks, dressed only in white suits, and master their seafood collecting skills through everyday hard work well into their old age. Currently, Japan is exercising continuous efforts to preserve the traditions and rites of Ama culture throughout the country. In 2009 the first national Ama Forum was held in Toba city and the unique culture has been designated as an Important Intangible Cultural Property, aiming for a UNESCO recognition as well. 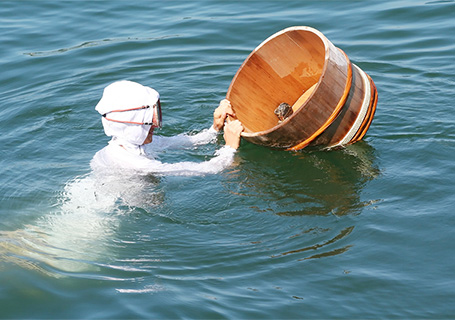 Various tourism initiatives have been devoted to popularizing the everyday life of Ise-Shima’s female divers. In particular visitors can enter and have lunch at a traditional-style Ama hut on the shore where the divers gather to warm up between diving. There visitors can also prepare freshly caught seafood on a sunken fireplace and socialize by conversing with the Ama about their tales of the sea. Nowadays popular Ama huts such as Hachiman Kamado and Osatsu Kamato in Toba and Satoumian in Shima offer this excellent opportunity to meet and talk with real Japanese Ama divers. 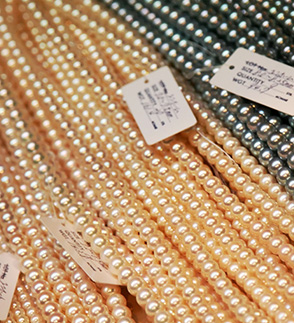 The region’s pearl industry developed through the traditions of female diving. In 1893 the local entrepreneur Mikimoto Kokichi became the first person to succeed in cultivating oyster pearls which led to the expansive growth of world’s pearl industry, now internationally famous under the Mikimoto brand. Toba city is home to the excellent Mikimoto Pearl Museum, built on an island connected to the mainland by a bridge. Visitors can not only learn more about the history of pearl cultivation in Ise-Shima, but even see how pearls are extracted from oysters and processed for jewelry making. The highlight of the museum is an hourly performance of Ama divers collecting oysters from the sea right below the island’s observatory. Although Toba Bay offers great opportunities for studying the traditions of pearl cultivation, the majority of Mikimoto’s pearls are planted and harvested in the inlets of the scenic Ago Bay in Shima city.

Ise-Shima is a top destination for leisure and entertainment

Ise-Shima also boasts a surprisingly high concentration of theme parks and entertainment facilities suitable for people of all ages. The area is rich not only in historical and cultural heritage, but also in resort hotels, hot springs and theme parks, making it a popular holiday retreat for people from Osaka and Nagoya. 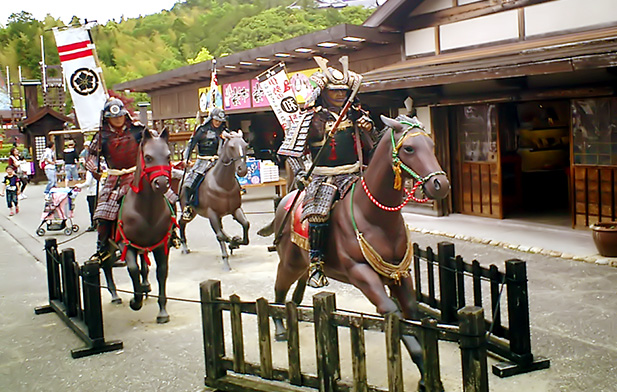 The Ise Azuchi Momoyama Bunka Mura, known as Ise’s Edo Wonderland, is a splendid theme park reproducing the flamboyant and gorgeous style of the Azuchi-Momoyama period of Japan’s history (late 16th century). The recreated castle town is built around a replica of the ancient Azuchi Castle, the main seat of the famous samurai Oda Nobunaga. This history-flavoured and fun theme park offers a variety of traditional-style attractions such as a ninja maze, a ghost house, medieval games, a ninja action show, geisha drama acts and much more! 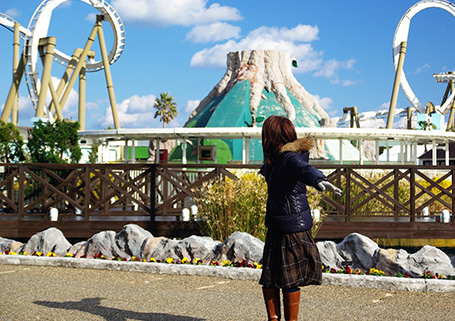 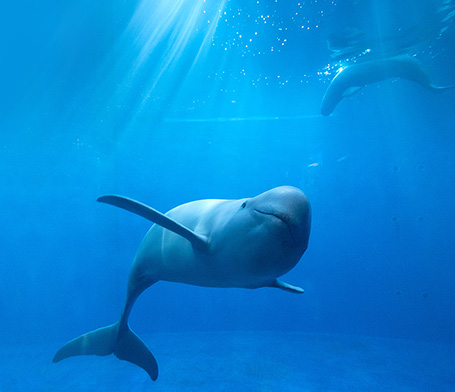 In addition to the facilities above, Ise-Shima is home to several splendid and large aquariums such as the Toba Aquarium with its 1200 marine species, the Futami Sea Paradise, famous for shows with rare sea mammals, and the Dolphin Island where guests can enjoy the attractive performances of dolphins and sea lions after a pleasant sightseeing cruise.

The Ise-Shima region is a true natural paradise with its rugged coastline and abundance of inlets and little islands. The beauty of the most scenic point – the Ago Bay in Shima – can be seen from the commanding panoramic views that Yokoyama observatory offers. The combination of its indented coastline, its island-dotted bay, and its scattered oyster rafts produce a unique landscape of natural harmony. Ise-Shima’s inland area encompassing the national park offers cedar-tree forests surrounding the sacred Ise Jingu where the mystic wood environment contributes to the special holy ambience of Shinto’s most venerated sanctuary.

Ise-Shima can be explored by car, train or bus, but a sightseeing cruise is most recommended for those who wish to feast their eyes on the uniqueness of the sea landscape. Besides regular boat rides around Toba Bay and Ago Bay, travelers can also enjoy the longer scenic Ise Ferry ride which crosses Ise Bay and connects Ise-Shima with the Irago peninsula of Aichi prefecture on the opposite side.

Ise-Shima is a marvelous resort destination for all those that seek complete relaxation in picturesque surroundings and desire delicious fresh seafood. The treasure of Ise-Shima region awaits your discovery!